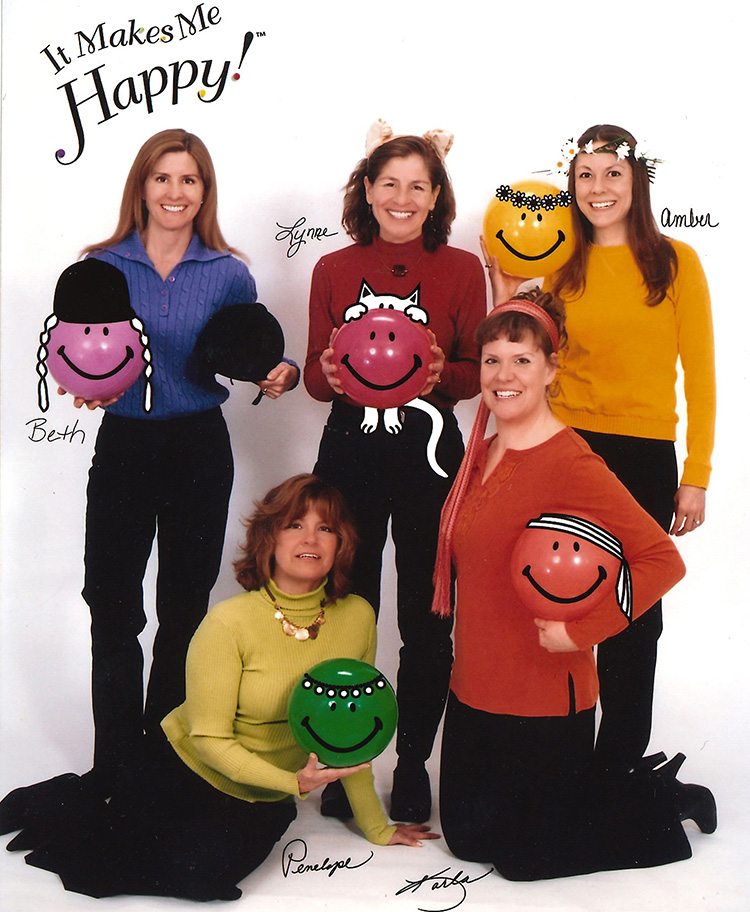 Deep in the heart of Allouez, Wisconsin there’s a group of friends who have become each other’s family. Karla shares, “Penny cut the cord when my son, Jack, was born over 20 years ago and fast forward two decades, when Amber gave birth to her youngest son, Gus, I cut his cord. Recently, Stella, Amber’s 6-year old daughter, Penny’s granddaughter and Karla’s Goddaughter asked, “Are Lynnie and Kaka my family?” Amber replied, “Yes, of course they’re our family.”” Supporting each other through thick and thin are Penelope, “Penny” Dart, Lynne Hyer, Beth Enos Jahn, Karla Brooks, and Amber Dart Schroeder. The closeknit friendship has worked wonders in each lady’s confidence and positive view on life. Even though they come from different backgrounds, different political interests, talents, religions and marital status, they come together with a single goal in life: finding joy in everyday living.

The friendship goes back to 1992, when Penny and Karla became neighbors, they started walking in the neighborhood in the mornings before work and shopping at rummage sales on the weekends. In January 2000, Karla was struggling with a health concern and her doctor suggested she start jogging again. Lynne was recovering from a back injury and wanted to start running again as well. While shopping at the local grocery store, Lynne and Karla bumped into each other and made plans to start running together. This led to training for the inaugural Cellcom Marathon. Karla also invited Penny and Beth to join in their training runs. The group ran the run participating in the half marathon. It was such a success that the group had to do more. They continued to train throughout the summer with camping trips to Peninsula State Park which included four-hour training runs in the park and the Whistlestop Marathon in Ashland, Wisconsin that fall. And so began a friendship that would challenge the ladies to improve themselves physically and emotionally!

Meet the members of this dynamic friendship! Penny Dart and Lynne Hyer are now retired and continue to live in Allouez. Beth Enos Jahn originally lived in the neighboring village but has relocated with her family to Utah. Karla Brooks also lives in the neighborhood and is a member of a local mental health community partnership. Amber Dart Schroeder, Penny’s oldest daughter lives nearby and is a full-time mother of four young children. The five friends are collectively known as the Goddesses.

The name came about after a regular Saturday morning run. During the subsequent breakfast of coffee and bagels hosted at Lynne’s home, the girls were deep in a “counseling” session discussing how people treat others. (One of the girls was having troubles with letting people walk all over her). During the discussion, they realized the best way to start putting their discoveries into practice was to envision themselves as “princesses”. For example, a princess wouldn’t be kept waiting for over an hour without a call explaining the delay. The girls later decided that, rather than princesses who were very girly, they were more evolved, like goddesses. They each chose a goddess name as a reminder of the lesson and collectively became known as ‘The Goddesses’. Penny Dart, the strong-minded beauty and matriarch of the group chose Delphia. Lynne Hyer, the practical peacemaker, chose the goddess name Sophia. Beth Enos Jahn chose the name Belisana, symbolizing the mom and tough girly-girl that she is. Karla Brooks took the name Athena as she is the creative dreamer. Finally, Amber Dart Schroeder, the cute young mother with a wise old soul, accepted the goddess name Iris.

The Goddesses don’t just run together; they also enjoy traveling the world. After their first marathon, the girls decided to take a trip to Italy. On the last day of the adventure, after visiting Florence, Venice, Pisa, and San Gimignano, they went to the Trevi Fountain in Rome. Karla instructed the group, “Throw in a coin for a ‘guaranteed return trip.’ This initial Goddess Adventure will be the first annual and we should do it every year.” While the idea seemed impossible, since then, the Goddesses have traveled the world.

Some past travel highlights include: staying in a castle which hid precious art from the Nazis in Italy; climbing Machu Picchu in Peru; visiting the Killing Fields and Angkor Wat in Cambodia (they still keep in touch with their guide whom they helped to build a school with the local children). They have floated along the Nile River in Egypt; crashed a friend’s wedding in Ireland; walked along the Great Wall of China, and so much more.

Yet, they were not always so happy. Like most life lessons, they learned many the hard way. Prior to finding friendship with each other, one of the girls was told to get some hobbies, another told to find her own friends, while yet another was trying to meet everyone else’s expectations. It was not until they all became friends and started getting together every Saturday morning for a jog, coffee, and bagels that the girls realized that an incredible bond was forming and the important life lessons they were learning. They slowly realized that they weren’t bitter anymore. Instead, they were choosing to look at things differently, and were having fun and enjoying life.

The group of friends has a favorite phrase that brings everything together and provides a new way to look at life. “It makes me happy” came about one Saturday during an afternoon of shopping. Penny had picked up a beautifully embroidered linen towel and said, “Dishtowels make me happy.” Then Beth selected a bar of handmade soap from Italy, took a whiff, and proclaimed, “Soap makes me happy.” Soon, they were all calling out what makes them happy and the phenomenon of It Makes Me Happy had begun. They started to take notice of the simple pleasures that their busy lives seemed to rob from them. Lynne recognized the irises from her aunt that were popping up on the west side of her house. Amber noticed the beauty in a white fluffy cloud against a bright blue sky while driving home from school. Karla took delight in her nine-year-old son’s drawing taped to the dining room door with enough tape to hold back an army.

In 2006, the group wanted to share their happiness with others—the Goddesses self-published a book to help individuals discover joy in everyday living. It Makes Me Happy walks participants through a simple process that helps people recognize ways to infuse everyday moments with meaning, resulting in increased levels of happiness. This technique teaches participants to look for small things in life and learn to express appreciation, love, and gratitude for them along the way. 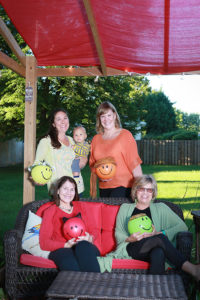 A recent research study on loneliness indicates that almost half of Americans experience themselves as lonely. A nationwide survey by the health insurer Cigna finds that loneliness is widespread in America, with nearly 50 percent of respondents reporting that they feel alone or left out always or sometimes. The Goddesses, after surviving breakups, makeups, health crises, feathering nests and empty nests recognized it was time to resurrect It Makes Me Happy. They want to give back to the community by sharing their formula for happiness. The group meets in what’s called a “Circle of Friends,” which promises a safe space offering love and acceptance where healing begins and empowerment takes root and grows. The girls want their neighbors near and far to find special moments each day to smile and say, – “It Makes Me Happy!”